It is easy to chart out when to sell, but it much harder in reality to know where you are in the business lifecycle. There are a lot of “business-lifecycle-bell-curve-showing-when-to-sell” charts on the web at various business brokerage websites and I have to admit to having drawn one up myself in the past in order to illustrate when to sell.

Here is the typical chart: 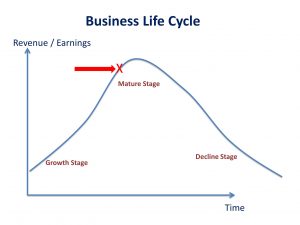 There are a lot reasons why business owners sell, but many sell because they just don’t have the passion for it any longer. It may be that retirement is nearing, you don’t quite have the set of skills to take it to the next level, or pure good old fashion burnout.

In theory, a new owner can inject new enthusiasm into a business, thus creating an entirely new lifecycle curve as shown below. 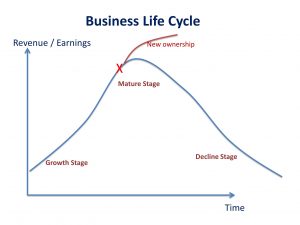 Looks nice, and it looks pretty easy to see when to sell. It is right there at the red “X”.
However, there are two problems with that curve. First, I’ve never actually seen a business with that particular curve. 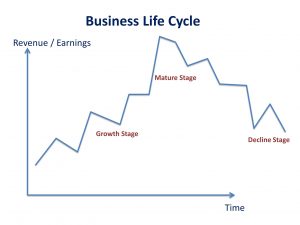 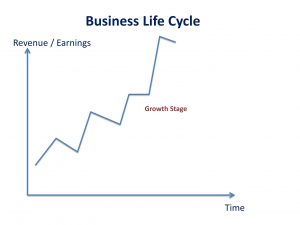 Now it’s a bit harder to see where to sell. Without the benefit of being in touch with your business, one would think the business is never going to decline. Where to put that big red “X” that shows the best place to sell?

I have personally witnessed that some business owners are not in touch with their business. Not even close. Sometimes I can see that a decline is coming, but I never push too hard because I’m a broker with monetary motives for trying to convince the owner to sell. So I advise and watch, and sometimes watch the company slip into a unsellable condition. For example, the signs are there that they are not spending enough time in the business, it is losing marketing share, there is internal ownership strife, etc. They don’t or can’t see it, and they run their business into the declining part of the curve, where it is almost impossible to sell at any price.

How Well Are You in Touch With Your Business?
You have to have your finger on the pulse of your business to know when the time is right. You can sense when you are not putting in the energy to move the business forward. Look for the signs, and be ready to move towards the exit. However, remember what a buyer sees is the following, basically a wonderful upward trend:

Are you misrepresenting the business? No, unless known market forces are behind a future decline and you don’t disclose it. However, most of the time that isn’t the case. You can disclose exactly why you want to sell, and explain how a new owner can maintain and sustain the momentum. The momentum that you haven’t lost – yet.

A 130 page detailed book, including real world stories, on how to sell your middle market business for the best price. You will be immediately taken to a download page and will not be added to any mailing list.

What our Clients Say

“I had no idea how much work was involved in getting a deal done. Graeme and Ney were key to getting the deal to close.” – Mark Stapleton, PowerChem Technologies.